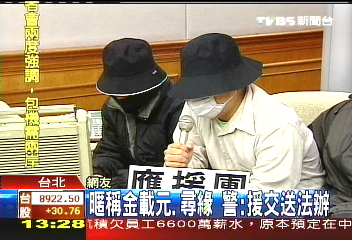 Over the past nine years,nearly 20,000 people have been prosecuted under aiwan’s notorious Article 29,which states that posting an Internet message that even hints at paid sex is against the law

When Kent logged in to a chat room with a username that means “looking for someone to keep” (想包養) last September, he had no idea this kind of online jesting would land him in jail for three months.

Neither did Jay know he would be prosecuted for a crime that carries a possible five-year jail sentence and/or fines of up to NT$1 million, when he left messages saying he was seeking a one-night stand on two adult-oriented Web sites last month.

The law that has brought these two — and many others — sleepless nights filled with gnawing fear and humiliation is Article 29 of the Anti-Sexual Business Provisions for Children and Teenagers (兒童及青少年性交易防治條例), which was enacted in August 2005.

Article 29 states that spreading, broadcasting or publishing messages that solicit or hint at sexual transactions over print publications, television, the Internet and other media is subject to prosecution. When applied to cyberspace, the article states that a Web message that hints at exchanging money for sex is considered a violation of the law. In other words, Article 29 punishes people not for what they do, but for what they say on the Internet.

In reality, this means that Web users face the hazard of being manipulated by undercover police into arranging a meeting for possible sexual transactions and being arrested in flagrante delicto.

According to activists, people who leave usernames or messages on the Net using terms such as pao yang (包養), or keep, yuan chiao (援交), or escort service, or requests for a one-night stand are brought to police stations to be interrogated, the transcripts of which later become evidence for their “crimes.” Even people who use homophones for yuan (援) are deemed questionable and, in many cases, found guilty as charged.

“We are persecuted for what we think and say. If it is not White Terror all over again, then what is it?” says Pan Shih-hsin (潘世新), who set up the Article 29 Study Group (兒少法29條研究會) last year, an online support group for the victims of Article 29 that already has about 1,900 registered members.

The origins of Article 29 date back to the late 1980s, when human rights, religious and womens groups joined together in an unprecedented humanitarian effort to help underage prostitutes, many of whom were Aboriginal girls who had been sold by their impoverished parents.

The first large-scale street protest took place in 1987 under the banner of opposing human trafficking. However, the initial focus of the movement quickly shifted from denouncing violence in human trafficking to condemning the act of buying sex from underage prostitutes, according to Wang Ping (王蘋), secretary-general of the Gender/Sexuality Rights Association in Taiwan (GSRAT, 台灣性別人權協會).

“Somewhere along the way, the progressive voices were hushed up by the conservative elements in the moment … The call for self-empowerment faded, and the belief in strict protection prevailed,” Wang says. “Instead of giving children access to sex-related information, they now attempt to block it as a preventive measure to protect them from possible sexual exploitation.”

The Anti-Sexual Business Provisions for Children and Teenagers statute initiated by child-protection groups was put into practice in 1995. To Wang and Josephine Ho (何春蕤), a professor at National Central University’s Center for the Study of Sexuality, it marked the beginning of an intricate web of legal and social measures designed to regulate and discipline the sexuality of Taiwan’s youth.

In 1999, Article 29 was revised to expand the range of offenses from conducting an actual sexual transaction with a minor to distributing messages soliciting or hinting at paid sex that could potentially be viewed by underage Web users.

Pan and Shih Tzu-chu (十字杵), who was prosecuted under Article 29, say victims’ statements they have collected show clear evidence of abuse of power by the police. Most serious is the controversial method of fishing (釣魚), or entrapment, which is meant to lure Web users into talking about possible sexual transactions and thus into breaking the law. When brought in front of police officers and prosecutors, the suspects, mostly young adults, are likely to be “coerced” into admitting they have committed a crime in exchange for a suspended indictment, which saves them the trouble and humiliation of going to court.

“The majority of the victims are students, computer engineers, office workers and law-abiding citizens who never before in their lives had stepped into a police station. They are clueless and terrified and will do whatever they are told to do,” Pan says.

There are strong incentives for law enforcement officers to investigate Article 29 cases. Under the current reward system, officers receive NT$1,000 plus one or two merits added to their year-end job evaluations for each case that is sent to the prosecutors’ office.

“Like salespersons, police also have work quotas to fulfill. It is understandable why cops choose to sit in the office and go fishing on the Internet instead of chasing drug dealers on the street. These structural deficiencies contribute greatly to selective investigation by the police,” says prosecutor Chang An-chen (張安箴) at the Taipei District Prosecutors’ Office (台北地檢署).

Pressure from higher-ups to see more results from investigating sex crimes against minors led to a jump in the number of people prosecuted to 7,354 last year, from 4,432 in 2006. According to Amy Wei (韋愛梅), section chief of the Crime Prevention Division in the Criminal Investigation Bureau (刑事警察局預防科), 80 percent of these cases involved Article 29 violations.

Since the 1999 revision, nearly 20,000 people have been prosecuted under Article 29. Of that number, roughly a third have been found guilty while another third have had the charges against them dropped. The remaining third have been given suspended indictments on the condition that they attend sexual equality classes, pay tens of thousands of NT dollars in fines, and donate money to charitable organizations or perform community service, according to statistics compiled by Shih Tzu-chu and professor Ho, both of whom are working with other civil groups to abrogate the law.

For those who have actually faced prosecution, it is an experience that scars for life. During one idle night last July, Hank passed the time by hanging out in an adult chat room for 12 hours. Several days later, he was a wanted man at nine police stations (because the alleged offenses took place in cyberspace, there is no such thing as jurisdiction). News of the investigation leaked to Hank’s workplace. His supervisor questioned him. Colleagues made fun of him or began to view him as a sex offender.

Though suspects who receive suspended indictments do not have criminal records, police records can still show past prosecutions. Hank’s search for a job in the security business was consequently abandoned.

“It has been a nightmarish year. If it weren’t for my wife and our newborn baby, I would have done silly things … I wanted to study abroad. I had lots of dreams. But now they are all gone,” Hank says. (Like others prosecuted under Article 29 interviewed for this article, Hank has been given an alias to protect his privacy.)

Four years ago, Rick was caught after he left a message on a Web site asking where to find escort services. He now finds himself unable to let go of the past. “I was a confident guy, but after that incident I was afraid to go out. Even now, I don’t dare let my friends know about it. I don’t dare have a girlfriend because I am afraid she won’t understand what happened … I’m almost 30 now,” Rick says.

The increasing number of pleas and complaints from angry Web users recently prompted the National Police Agency (警政署) to issue an administrative decree that prohibits the use of entrapment and attempts to clarify what kind of language and behavior can constitute a violation. Police stations across the country have been asked to review each case before it is sent to the prosecutor.

And — at least for this year — Article 29 has been crossed off the list that establishes annual arrest quotas for selected crimes.

Wei also says the rewards system will be abrogated and more amendments will be made as the law is revised.

To many who have been prosecuted under Article 29 and see themselves as scapegoats, it is too little, too late.

“Who will compensate us for what we have been through? And will such a day ever come?” Jay asks.

“The death of the captain in 2004 earned us two years of peace … [But] things will return the way they were before,” says Hank, referring to Cheng Tsu–yuan (鄭祖元), a young Army officer who killed himself after being prosecuted under Article 29.

Exactly when the amended legislation will be passed and what version will be adopted remains unclear. But some legal experts say even a revised version of Article 29 would be unlawful.

For professor Ho and others, the criminalization of sexual content on the Internet violates the freedom of speech in a society where the terms “escort service,” “dating for assistance” and “kept lovers” are part of the everyday lexicon. Article 29 is a potent censorship tool because it gives authorities the right to interpret and define what is and is not a crime, especially since it contains the word “hint,” a highly ambiguous and non-legal term, as prosecutor Chang points out.

According to attorney Law Bing-ching (羅秉成), Article 29 also poses a legal contradiction since it makes talking about paying for sex a punishable crime, whereas the act of paying for sex is not. Article 80 of the Social Order Maintenance Law (社會秩序維護法) states that an adult found guilty of soliciting sex in a public place can be jailed for three days or fined NT$30,000. A person who actually visits a prostitute, however, gets to walk away free.

“If you decide it’s a crime to expose minors to messages about sex, then you have to ask why such messages on the Internet are more punishable, since sexual content is omnipresent in our society, from movies, magazines and advertisements to televisions sets in peoples’ homes,” says Law, who asked the Council of Grand Justices to rule on the constitutionality of Article 29 in 2006.